Our previously published article listed the top 9 programming languages of 2016 using data available from www.indeed.com. Here are our results when we did similar research on www.gooroo.com.

Still, looking for the next big thing in terms of the highest-paying programming languages? With more and more e-learning modules, virtual classrooms, and certification courses coming to the fore, aspirants like you are easily lost for choice. Here’s our take on how you should chalk the way forward with regard to having valuable programming skills on your resume. We have tapped resources on salary analysis and career opportunities to bring you this list of top programming languages that you should be looking at in 2016. Go for it. 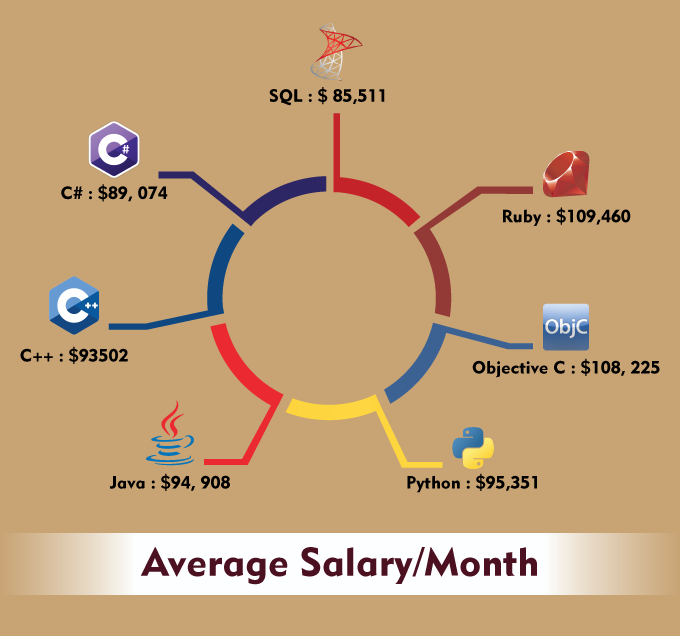 With an average salary of US$109,460 to boast of, and 5093 monthly jobs advertised worldwide, Ruby (like Python) is a high-paying programming language. Having gained a lot of popularity after the introduction of its Rails framework (which has enabled intuitive web development techniques for Ruby), this programming language is where the future is. Metasploit and Twitter are two notable applications created in Ruby!

Objective-C, fetching an average salary of US$108, 225, is one of the most coveted highest paying programming languages for developers in USA. It boasts of 1800 job postings monthly and is oft-considered as the C# of OSx / iOS systems. This de facto language for most software developed for iPhones, iPads and other Apple products is becoming popular for application development for MacBooks as well. Objective-C follows the rules and guidelines as dictated by its mentor, Apple, and is proprietary in nature.

Python also positioned at the top end of the list of highest paying programming languages in 2016, will help you take a monthly average salary package of US$95,351 home. With more than 10831 monthly job postings worldwide, Python first made its mark in the 1990’s. Easy-to-learn and understand, this programming language has a small learning curve, and packs in the punch for web development, 3D rendering, and scientific computing alike.

Have you jumped on the Java bandwagon yet? If not, then get attracted by a monthly average package of US$94, 908; just as the many others who aspire to grab over 28,562 Java centric job postings worldwide. Though launched in the 1900s, this open source language is still high in demand and can be freely downloaded to run on any device. Java is aiding the development of software applications for smart phones, Android devices, smart TVs and computers, and is much sought after by small and large organizations worldwide. In the prevalent Java scenario, organizations like JP Morgan, eBay, and Google are always looking for JEE application developers, solutions developers, software engineers, and senior Java developers – do you fit the bill?

A monthly average salary of US$93502 is luring programmers to the world of C ++ that is posting over 9754 monthly job posts across USA, Britain and Australia. Very useful for the development of higher level applications such as video game engines (think Halo, Fifa and Call of Duty) and accounting software, C++  is certainly making it big in the world of computer graphics drivers,  browsers, trading algorithms, and computer animation studios of the likes of Disney, Pixar, and DreamWorks.

How would you like to take home an average salary of US$89, 074 per month by developing programs with C#? With more than 19,571 monthly job postings on a global basis, C# is one of the highest paying programming languages today. Developed in the initial years of the 2000s, C# was once a general-purpose language for several Microsoft products. Today, it nurtures many of Microsoft’s .NET applications, server side web systems, and big-sized projects with flair.

On an average, SQL, one of the highest-paying programming languages of its times, is helping developers draw an average monthly salary of US$ 85,511. With over 40000 monthly job postings to opt for, SQL Server is one of the most popular business analytics and data management and platform—for all kinds of data, applications, and platforms. SQL database operators and admins, with their proficiency in Oracle, MySQL, and PostgreSQL, are helping businesses, governments, hospitals, and banks remain more organized than ever before. So, do you have the expertise in place to create SQL-enabled software/web applications that can retrieve information from any database?

The endless list of high-paying development languages are encouraging pros and new entrants with lucrative returns. Become a part of this revolution, right away. Let us know your comments and views about other top paying programming languages below; we will love to hear from you.