There is usually widespread confusion on what is the difference between React.js and React Native, especially among novice developers.

The reason is, that React and React Native share the same parents, even similar names, as well as a common technology backbone. But that doesn’t mean that there are no differences. However, to understand them, we first need to have a basic knowledge of both frameworks.

React.js was an initiative by the Facebook team in 2011 to create a dynamic UI that is highly responsive and has high performance. React Native was founded 4 years later to address a cross-platform application that can code more efficiently and faster than native applications.

In simple words, React.js is for web development, and React Native is for mobile application development. But, let’s take a detailed analysis.

React.js is a JavaScript library used for developing reusable UI components, created by the Facebook team in 2011.

It is basically a JavaScript library built to create user-friendly and responsive UI components. They are commonly known as React. This library is responsible for the rendering of UI components. It is mainly used to support both front-end and server-side operations. 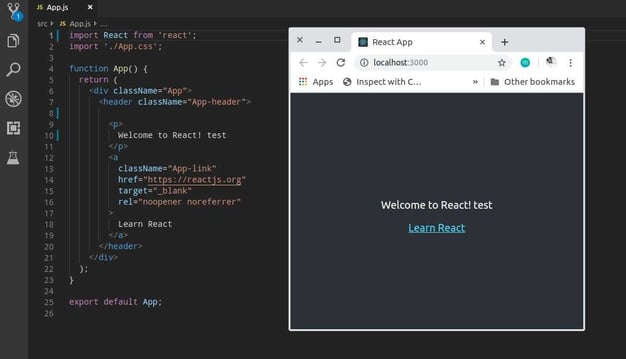 There are different features for React.js. Some of them are,

In React, it uses JSX instead of regular JavaScript for templating. JSX allows HTML quoting and uses these HTML tag syntaxes to render subcomponents. This HTML syntax is processed into JavaScript calls of React Framework. We can also code with pure old JavaScript.

The main advantage of using React.js is that it uses virtual DOM (Document Object Model - which is a language-independent and cross-platform interface that treats an HTML or XML document as a tree structure wherein each node is an object representing a part of the document) which is a JavaScript object. This will enhance apps performance since JavaScript DOM is faster than regular DOM. React can be used on the client and server side as well as with other frameworks. The components concept improves the readability of the code.

What is React Native?

React Native is an open-source JavaScript mobile framework built by Facebook. It enables the developer to code for cross-platform applications with the quality of native apps.

React Native has influenced the mobile development industry very much. Applications like Facebook, Instagram, Skype, etc was built using React Native. We can see the rich UI and smooth animation support of React Native in each of these apps. 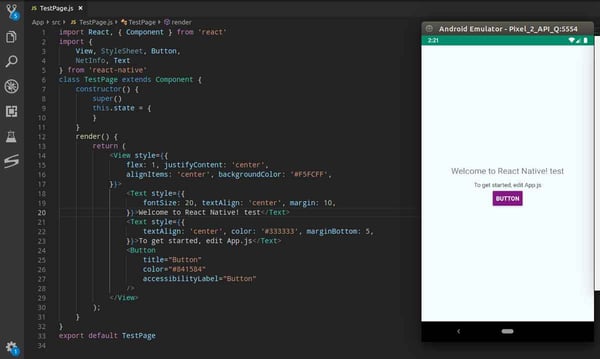 React Native helps you create real and amazing mobile apps with the help of JavaScript only, which is supportable for both Android and iOS platforms. The main aim behind React Native is to code once and make it available for iOS and Android platforms, which helps to save a lot of development time.

Found and backed by Facebook, React Native has very large communities that provide support for this framework.

Coding with React Native is so simple. There are many UI libraries available today that has every component of React native libraries customized.  Also, many code editors like the premium Visual Studio Code now supports React Native extension making it more code friendly.

The deployment of Android apps should be done via Android Studio and iOS via Xcode just as in case of native apps. Also, React Native gives us the freedom to code natively too. Facebook App is built on such a method.

To be a great React Native developer, one should have some knowledge in new JavaScript ES6 — the most recent version of the language. Since ReactJS is the core of React Native, understanding of the former is key. It would be nice if you have little knowledge of Node.js and then you can finally start your adventure with React Native.

When we start a new project in React Native,  we will get a few developer tools from React without installing anything. With this, we can set up a basic project without struggling more. Hot Reloading is an option, which helps you to see small UI changes in our app.  For bigger changes, there is a Live Reload option which reloads the entire application on saving.

Another important feature of React Native is the Chrome dev tools, which inspects network request and display consoles and helps us to do debugging.

React.js and React Native are almost the same in every manner. React Native is built on React.js. Hence,  developers can find more of React in React Native.

React.js library is a JavaScript library that brought together a new way of rendering pages at the speed of JavaScript which in turn leads to responsive and dynamic user input.

React Native, on the other hand, is a JavaScript programming language used for cross-platform mobile application development.  It was also developed and launched by the Facebook team in 2015 and is now the trending and most popular development framework among app developers.

React Native gets all the advantages of React.js. React.js and React Native both follow the component-based architecture. Both of them use the same React components.

Both React.js and React Native use Redux for common state management. Redux is a standalone library that can be used with any UI application. The official React binding library used to combine React or React Native with Redux is “React Redux”. React Redux helps React components read data from a Redux store, and dispatch actions to the store to update data.

The life cycle of React.js and React Native are the same. Life cycle methods are as follows: 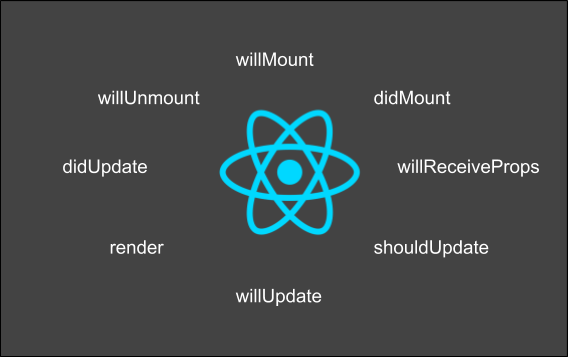 React is best for building high performing, dynamic, responsive UI for web interfaces, while React Native is meant to give mobile apps a truly native feel. React.js is the soul of React Native.

React was developed to render web UI components more quickly and efficiently. Its popularity among industry leads a way to develop a highly user-friendly mobile framework. Hence, React Native was developed. Both of them met user expectations and is still growing with the flow.

Both React and React Native has a very promising future. Since all of its basic components are built-in JavaScript, they have a large community and can easily get support from these communities. There are many libraries for both of them to simplify our developments, just like templates.