“Whether you want to uncover the secrets of the universe, or you just want to pursue a career in the 21st century, basic computer programming is an essential skill to learn”. 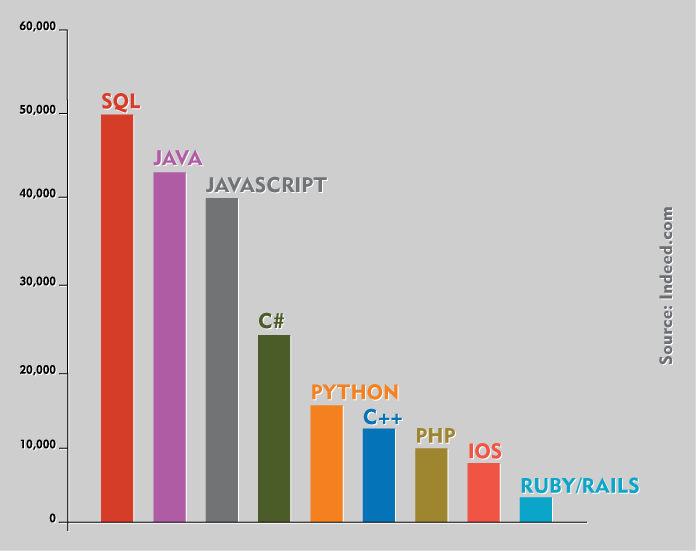 Programming languages are ranked according to the jobs posted on the indeed.com website.

This special-purpose programming language topped the chart of programming languages in 2016. The demand for SQL programmers is very high, and it is expected to rise in 2016 as well. On average, a professional with SQL skills can earn around $100k-110k per annum.

Java sits pretty at the second position, but this does not mean that it is losing its sheen, it will still be the most preferred language in the year to come. The job prospects for Java developers are expected to be very high in 2016. On average, Java developers will reap an annual income somewhere between $100k-$110k.

JavaScript was adopted by most of companies in the year 2015 for developing their interactive web pages and it is expected to be similar in 2016 as well. Most of the websites that we see on the internet make use of some elements of JavaScript to add a good user experience. On average, a JavaScript programmer earns around $90k-$100k.

Part of Microsoft’s .NET family, C# is used by programmers to develop standard Windows software and server-side web applications. Though this language was not so popular in the initial stage, slowly, its popularity is growing. Applications such as Bing and MSN use C#, and this programming language is also used for developing mobile phone applications that run on the Windows platform. On average, C# professionals earn around $90K-$100k.

Python is a general-purpose language that was designed and developed in the early 90’. This language is suitable for novices or individuals who have very little programming exposure. Python is very simple and readable since it closely resembles the English language. NASA, Instagram, YouTube, and Reddit are few examples that used Python for their websites. On average, a Python developer earns around $105-$110k per annum.

C++ is considered the advanced version of the C programming language, with additional features. C++ is mostly used for developing high-level applications like accounting software or video game engines. C++ takes the fifth position in the top programming languages of the 2016 chart. On average, a C++ professional earns around $100k-$110k per annum.

PHP has been designed and developed for web applications. This programming language is decent of C and it inherits if not many, some of the features of the C programming language. Some of the popular websites that use PHP are Yahoo and WordPress. The job prospects for PHP developers also appear to be bright. On average, a PHP developer earns around $85k-$90k per annum.

Apple Inc. has never been short of innovative technologies. The think tanks of this American-based company decided to build their own programming language in 2014. This decision paved the way for Swift's programming language. Many US-based companies have already adopted Swift language and this number is expected to balloon in the near future. On average, Swift programmers earn $100k-$110k.

Ruby is very much similar to python and it has been around for a long period of time but it did not become popular as Python. After a Rail framework was developed for Ruby this programming language became pretty popular as it is easy to understand and program. Twitter and Groupon use this language for their web applications. On average, Ruby on rails developer earns around $100k-$110k per annum.

Having programming skills in your arsenal of abilities is always beneficial for professionals. We hope that our list of top programming languages would be useful to you.