A Complete Guide to SQL

In this article, the author has started with the fundamentals of SQL and gone deeper to explain various SQL commands used by programmers and what the advantages are there of using SQL.

Every corporation nowadays requires data to manage its operations. The greatest option for storing a well-organized collection of data is a database. Furthermore, the most used computer language for data storage and retrieval in databases is SQL (Structured Query Language). It allows us to perform that CRUD actions (create, read, update, and delete) on the database.

In order to manage a database's data efficiently, every developer should be familiar with the fundamental SQL concepts covered in this article.

SQL full form is a Structured Query Language. It is a programming language that enables you to carry out certain activities and query databases. A key component of the software you use to access your data is SQL, which is utilized in practically every database management system.

What is SQL used for?

SQL's primary function is to operate on and retrieve information from relational databases. It gives us the ability to create new databases, views, tables, stored procedures, and functions.

The history of databases and SQL language is a long, complicated tale. The first database management system (DBMS) was developed in the 1970s, but it wasn’t until 1986 that a relational model for databases was created.

In the 1980s, IBM released System R, the first product to use a relational database model. However, it wasn’t until 1989 that IBM launched SQL-90. This version was not only the first standard for relational databases but also included window functions, XML- related features, and other new features.

In 1999, SQL 3 was released with many new features like triggers and object orientation. In 2004, SQL 2003 came out with more enhancements related to temporal databases and its support for XML Query Language (XQL). In 2006 version 3.5 featured improved support for temporal databases as well as improvements to text searching capabilities.

Additionally, in 2011 version 10 introduced improvements such as improved support for temporal databases along with better performance than previous versions due to its use of parallel processing techniques called vectorization.

When to use SQL?

SQL is most useful when you're working with one of the many open-source database management systems (DBMS). SQL is used more often than not when working with sequel programming languages like MySQL and Postgres—but it can also be used with other popular DBMSs, including Oracle, Microsoft Access, and Microsoft SQL Server.

A programming language called SQL is used to control the data kept in databases. Although it is a simple language, it is incredibly effective. SQL can create new database tables, edit existing ones, and delete data from SQL database tables. By adding, deleting, and altering tables as well as other database objects, SQL can also change the structure of the database itself.

A set of commands called SQL are used to manipulate data in databases. Examples include SQL SELECT, which fetches data from database tables, SQL INSERT, which adds data to database tables; and SQL UPDATE, which updates information already in the database.

With so many companies relying on big data analysis to drive their direction, having an understanding of SQL experience is one of the most in-demand skills for today's workers.

SQL, Lisp, and Haskell are the only programming languages that I’ve seen where one spends more time thinking than typing.

Developers can change the data stored in a relational database using structured query language (SQL) commands, which are specific keywords or SQL statements. SQL commands fall into the following categories.

Data retrieval commands are written in the data query language (DQL), which is used to access information kept in relational databases. Applications utilize the SELECT command to filter and return particular results from a SQL table.

Statements in the relational database's data manipulation language (DML) add new data or change already-existing records. As an illustration, a database record is added by an application using the INSERT command.

DCL is a programming language that database administrators use to regulate or provide other users access to databases. For instance, they could use the GRANT command to give specific apps permission to manipulate one or more tables. 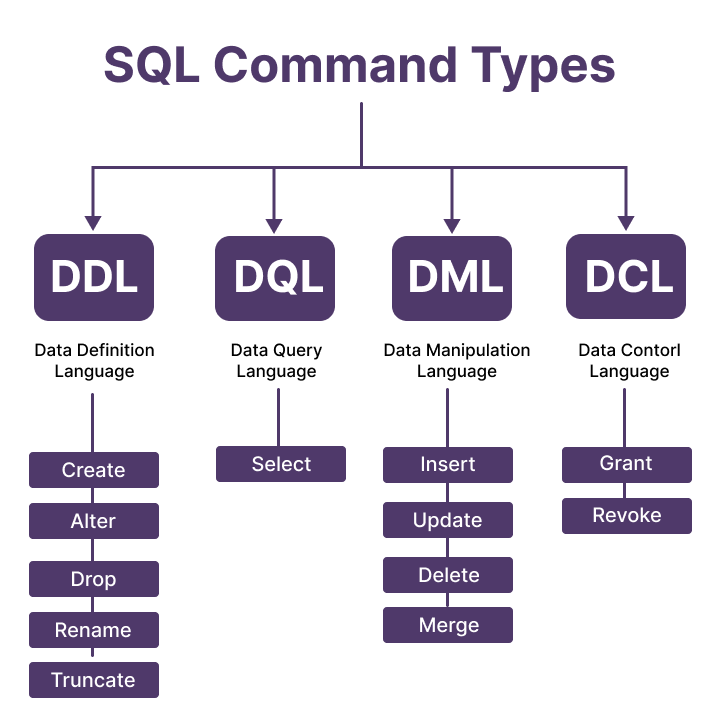 How is SQL used?

SQL is used by businesses and organizations to store data in databases. It's also used by software developers to write applications that interact with databases. SQL uses Structured Query Language (SQL) to make it easier for people to access and manage data, whether they're accessing data on a server or a data storage device like a hard drive. SQL is one of the most common languages used in software development in today's digital era.

An implementation of the structured query language (SQL) uses a server machine to perform database queries and return responses. Several software elements, including the following, are involved in the SQL process. 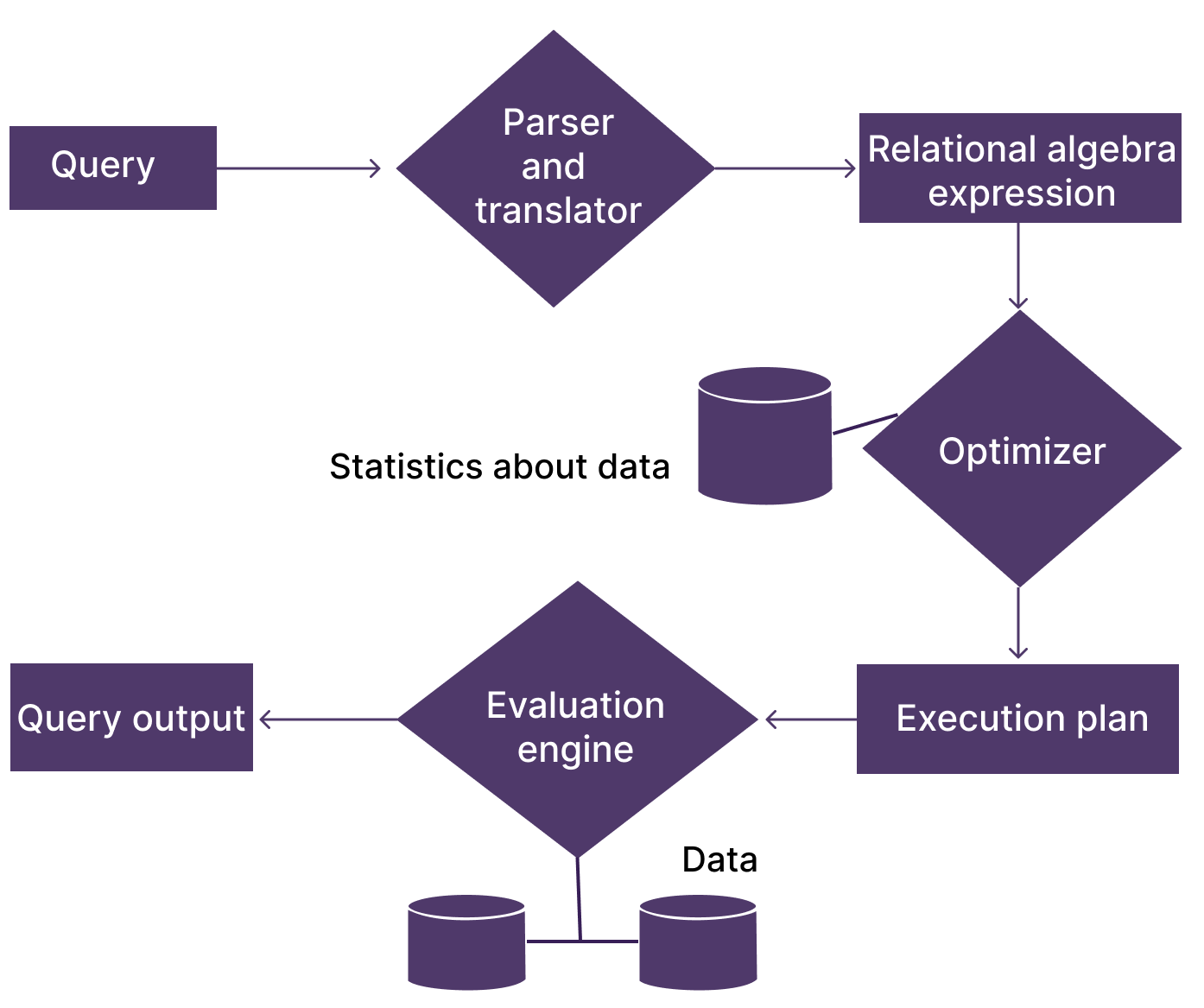 The parser begins by replacing some of the words in the SQL statement with unique symbols, a process known as tokenization. The statement is then examined for the following:

The relational engine, also known as the query processor, designs the most efficient way to retrieve, write, or update the associated data. For instance, it looks for comparable queries, makes use of earlier data manipulation techniques, or develops new ones. It creates the plan in byte code, an intermediate-level version of the SQL statement. To efficiently explore and modify databases, relational databases use byte code.

The computer program that interprets the bytes of code and executes the desired SQL statement is called the storage engine, sometimes known as the database engine. Physical disc storage reads and stores the data from database files. The storage engine delivers the finished product to the requesting application.

Oracle offers an open-source MySQL relational database management system. Without paying a licensing cost, developers can download and use MySQL. On several operating systems or cloud servers, they can install MySQL. For online applications, MySQL is a well-liked database system.

For the building and manipulation of databases, structured query language (SQL) is the industry standard. SQL queries are used by MySQL, a relational database application. The MySQL software is constantly updated and improved, despite the fact that SQL instructions are defined by worldwide standards.

The Advantages of SQL

To organize and distribute data, programmers frequently utilize SQL. The benefits of SQL often outweigh its downsides, despite some of them, including a clumsy user interface and inefficient cost management. SQL is very user-friendly and extremely accessible across a variety of platforms, making it possible for anyone to become an expert. 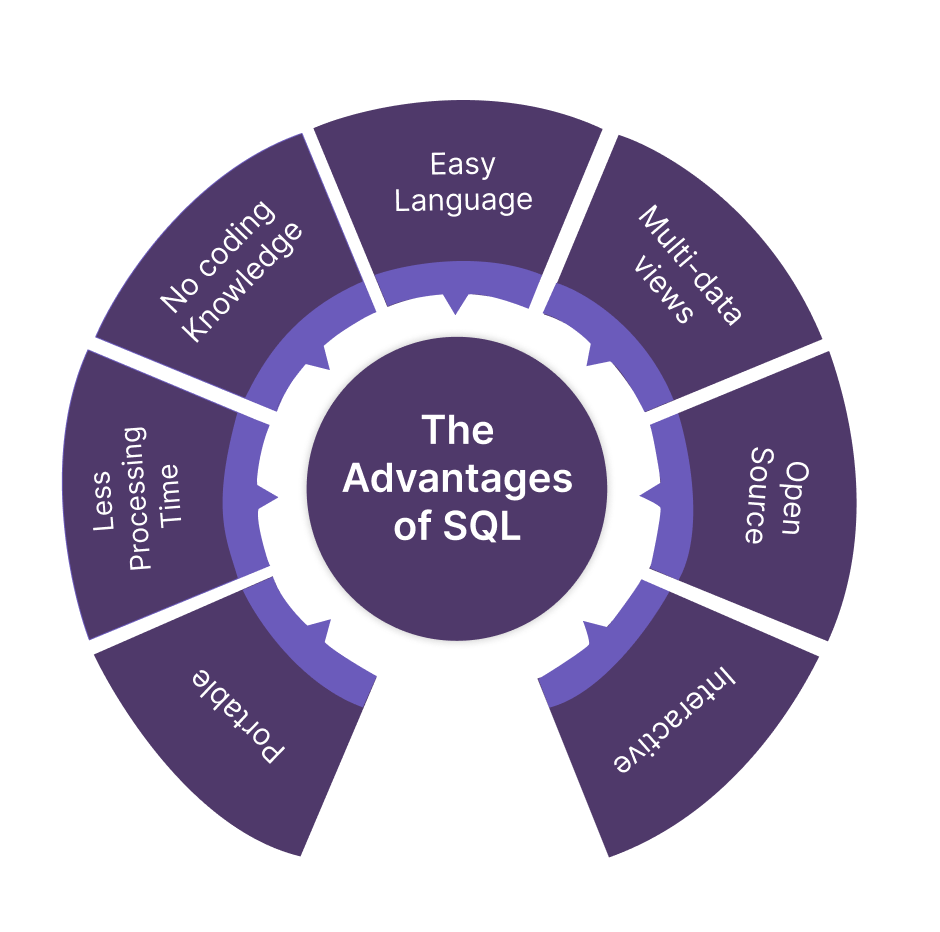 Portable: SQL is portable. It can be utilized on computers, servers, laptops, and a few mobile devices. It is powered by regional intranet and internet networks. Its portability makes it a practical choice for users because they can easily move it from one device to another.

Less Processing Time: Quick query processing is available. SQL is capable of quickly and effectively retrieving data, regardless of size. Additionally, it can quickly complete tasks like data processing, deletion, and insertion. You won't waste hours waiting for your data or sharing it with others because quick query processing ensures accuracy while saving time.

No coding Knowledge: Coding knowledge is not necessary. Coding is a challenging form of computer communication. Coding, which is also known as computer programming, may be complex to understand and use and requires a lot of practice. Thank goodness, SQL just requires the usage of basic terms like "select," "insert into," and "update."

Easy Language: It makes use of formal language. SQL is very accessible to all users thanks to its standardized language. Even individuals with no prior expertise can easily learn and write SQL because it offers a consistent platform and primarily employs English terms and statements.

Open Source: The source code is available. Large communities can use the free SQL databases provided by MySQL, MariaDB, and PostgreSQL at a cheap cost.

Interactive: It is quite engaging. You could be curious about whether other people can read and analyze the data, even if you completely comprehend SQL. Thank goodness you don't have to worry about misunderstandings or miscommunications because SQL is an interactive language for all users. Learn how to enhance communication in your workplace.

There are numerous advantages to learning SQL, including the ability to use SQL to revolutionize how you view, analyze, and make better business decisions based on your data.

It’s easy to learn and upskill with OdinSchool, as we offer an excellent Data Science Bootcamp that can help you start your career as a Data Science Professional. Apply today!