More and more people are adopting JavaScript. Be it in the front end, the back end, building mobile applications and Artificial Intelligence applications, JavaScript has become an integral part of the development. JavaScript brings in many libraries and frameworks out of which we will focus on the two most popular and important ones - REACT & ANGULAR in this article.

React and Angular, the most widely used technologies, have made developers' lives much easier. They help developers to maintain code by dividing it into various modules or components, refactor the code and reuse it. So, how are they different and how does one decide which technology to use? And here we are to help you understand the major differences between React and Angular. Before we step into our theme, let's get familiarized with some terms and jargons that will help for a better understanding.

What is Front-End Development?

To build the front-end of a web application all we need is HTML, CSS, and JavaScript. By using these we can easily finish the complexity in small and medium applications, but achieving high complexity makes life tough and wastes a lot of time. To improve productivity, speed up the development process and make it easier we use Libraries and Frameworks.

Multi-Page Application (MPA) is the tradition web pages where every request is sent to the server, and a response is received from a server. MPAs used AJAX to refresh only a part of a web page. But the problem with AJAX is that it adds more complexity and makes development more difficult. In MPAs the front-end and backend are tightly coupled.

Single Page Application (SPA) is the modern web pages where page reloading is almost zero. Once a request is sent to a server, a response in the form of the package comes to the client and is used for every request made. This way SPAs are faster that MPAs as they execute the logic in the browser and not in the server. Only the data is transferred between the client and server rather than the whole HTML that costs a lot of bandwidth. SPAs can be achieved using the latest JS frameworks (like Angular and Vue) and library (like ReactJS).

Difference between Library and Framework

- The library is a collection of reusable code using which common problems can be solved.

React is a Library for building user interfaces that are interactive. It is a library which just covers the View part of MVC.

Angular (and Vue) are frameworks for building front-end web applications. It is an MVC framework.

React is introduced by Facebook and was first released in 2013 and the currently available and stable version of React is 16.X which was released in Nov 2018. React supports JavaScript languages.

Both these technologies have a lot of similarities and differences in them. Like Angular is very specific about the structuring of an application. As a developer, it is enough to concentrate on the development of the product/application and the rest like the usage of libraries (routing, ajax requests, etc.) will be taken care by the Angular Framework. Whereas React just gives the View of MVC and both Model and Controllers need to be planned by the developer along with the product development. It doesn’t provide any library on its own for routing, state management, etc. It totally depends on the developers perspective in taking things.

In Virtual DOM, only the difference between the previous and current HTML tags are observed, and the difference is updated. Each UI part in React is a component, and every component has a state. When a state of the component is modified, the Virtual DOM is updated by React. After updating the Virtual DOM, React compares the present version of the Virtual DOM with the previous version and looks for which objects have been changed. This process is known as “Diffing”. These changed objects are then updated in the real DOM. This reduces the execution time and provides high-performance. 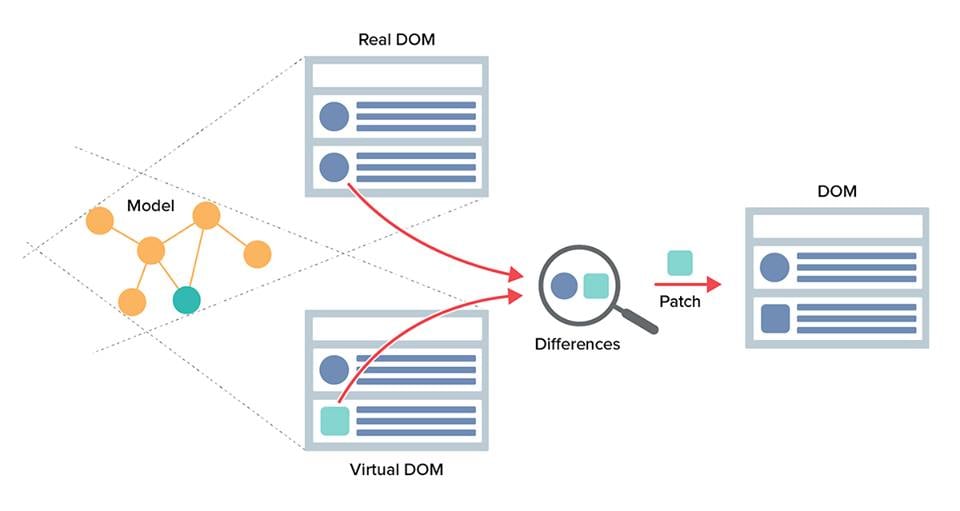 Angular uses Regular DOM in which the entire tree structure of HTML tags are updated till it reaches the updated HTML tag.

React with JSX and Flow

Angular with Typescript and Templates

Angular uses Typescript which is given by Microsoft and is a superset to JavaScript. Typescript is very much similar to other object-oriented programming languages like Java, C#.NET which is a benefit to programmers coming from this background. Angular uses templates which are enhanced HTML along with Angular directives like *ngIf, *ngFor. 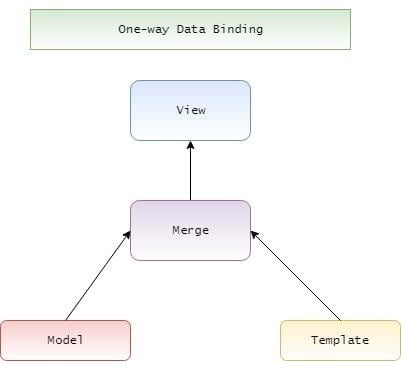 The Two-Way Data Binding in Angular changes the model state as per the changes made in the UI element and also the vice-versa is same.

Create React App is a CLI utility to React that is used to quickly create and run the projects.

Angular CLI (Command Line Interface) is a tool that is used to bootstrap an application with very less configuration. With very fewer commands Angular CLI helps to create and run an application.

React Native is a platform to develop native mobile applications using React. React Native allows components that can be bind to native code which is written in Java or Objective C. 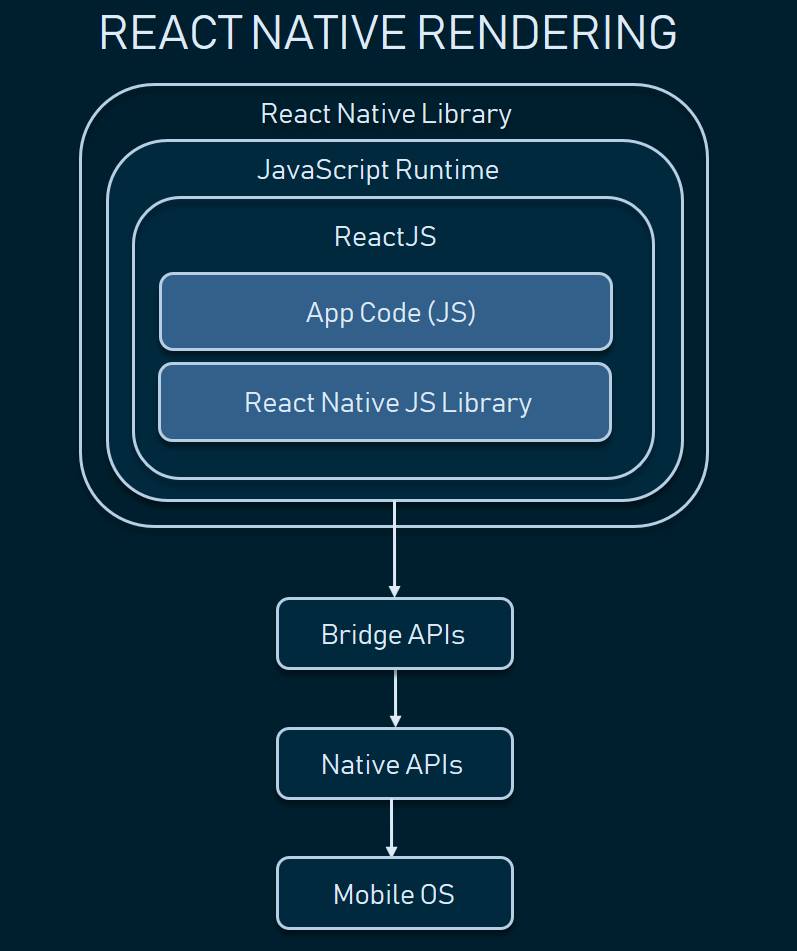 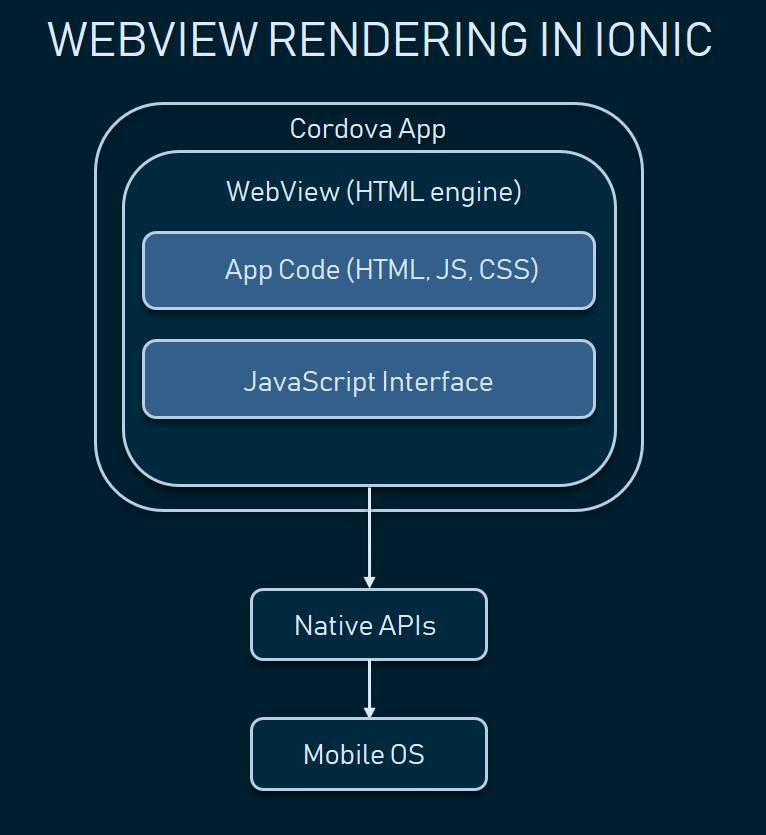 React’s Context API allows data to be available to all the components listed in the tree. There is no need to pass the data around explicitly. Other well-known libraries used for state management in react is Redux. The entire state of the application is represented using a single object, and changes to these objects are done using Reducers (which are pure functions) that are implemented separately. Another similar library for state management in react is MobX. MobX maintains only the minimal required state and derives the rest from it.

Angular components hold data in its properties and pass the same to child components. This communication is achieved through @Input and @Output decorators in Angular. Whereas when the components are in sibling relation, the communication between the components can be achieved using Services and Subjects/Observables. This can be tricky when the application grows. This problem can be solved using NgRX which is a state management library that is inspired by Redux and uses RxJS which calculates data in the state.

JSX is the new thing to learn in React. Apart from this new thing in React, concepts like writing components, managing state, configuring, etc. and the rest, ie usage of JavaScript remains the same. In the advanced usage of React, routing needs to be implemented using some libraries like React Router, State Management using Redux, MobX are required to learn.

Flow is a tool that resolves type checking for JavaScript. It parses the code and resolves the type errors like the implicit cast.

Reactive Extensions for JavaScript is a library for reactive programming that makes asynchronous operations more flexible. RxJS provides operators like mapping, merging, splitting, filtering, etc. which are used to perform operations on a continuous stream of data. Angular has adopted this library and is extensively used in Asynchronous operations or HTTP requests. Observables are returned for every HTTP request that is performed and the advantage with observables are the requests are cancellable.

JavaScript experts can get started with minimal training as the JSX seems to be very new to write. However, it is not complex for experienced JavaScript developers. It may take a very little time in writing components, configuring. But nothing new as in Angular. React is best suitable for apps that have a lot of Dynamic content.

React: When to Use

Angular: When to Use

Experienced Java,C# and .NET developers take minimal time in understanding Typescript. But the framework as it is rich in topics (like modules, dependency injection, components, services, pipes, etc.) will be a challenge.

To conclude the comparison between the two top front-end technologies and to name the best technology has no meaning because both are best in their own way. It really depends on the requirement, the project, the developer and his perception, as Angular comes with many modules thus making the developer concentrate on the project whereas React allows you to work with different libraries thus making the developer explore many libraries. Also, if a developer is looking for a very less in size application then React is the best and if looking for a high learning curve with a higher number of features then Angular is the best.